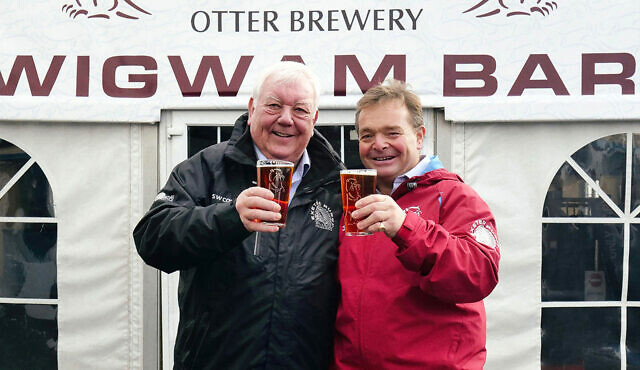 Rugby is definitely in our veins and the relationship that we’ve fostered with Exeter Chiefs is one we cherish. So it’s a great feeling to have just extended our involvement with the club and English Premiership rugby for the next 5 years.

Building on a strong relationship that pre-dates their promotion to top flight rugby in 2010 and with Otter Bitter the official cask beer for match days, thirsty fans coming to Sandy Park are guaranteed a rousing day out watching some of the countries best players – see if you can spot the otter on the players’ shorts.

Come half-time there’s also the chance for the adventurous to take on Derek the Otter…. a stadium legend. We’ve evolved the format for this season so instead of tackling our furry friend, the ‘Otter Challenge’ is now an obstacle course of sorts where teamwork is the name of the game – think Gladiators meets the Crystal Maze!

The Chiefs were Premiership Champions in the 2016/17 season (also four-time finalists) and the sport’s popularity is now at an all-time high following the recent Rugby World Cup. The club prides itself on their support and integration into the local economy and is a real force for good around Devon raising tens of thousands every year via its Foundation for local charities. Over £200,000 was donated in 2018/19 with more than £1 million raised since inception. We’re pleased to play a part in that too as well as encouraging the next generation of players.

Tony Rowe OBE, Chairman & Chief Executive of Exeter Rugby Club, added: “We’re delighted that we are able to extend our long-standing partnership with Otter Brewery. Together we have over the years forged a fantastic and winning formula when it comes to providing entertainment and beer at Sandy Park. We look forward to building on that over the next five years and thank Otter Brewery for their continued support towards the Chiefs and, of course, the Exeter Chiefs Foundation.”​

To keep up to date with all upcoming fixtures click here.