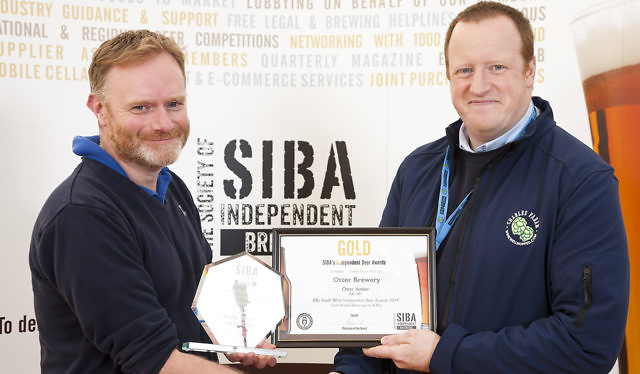 Otter Amber has just won Gold to be named ‘Best Cask British Bitter (up to 4.4%)’ in the South West – not a bad way to celebrate 10 delicious years as top dog in the Otter stable.

The awards, run by the Society of Independent Brewers, took place at the famous Tuckers Maltings Beer Festival in downtown Newton Abbot – a dark and aromatic beer drinker’s nirvana. Already a firm favourite on the South West beer scene, our zesty mid-gravity beer also went on to win Bronze in the ‘Overall Champion of the Cask’ competition from the 263 different cask beers judged this year….. a smooth operator if ever we saw one.

Word on the river bank is that there’s never been a better time to explore the world of Otter – lager or ale, keg or cask, cider or spirit – as a tight-knit team we’re very proud of the brewing heritage that we have. Following on from Tarka Four’s big win in February (….. now officially the ‘UK’s Best Session Lager’) it’s another big well done to our Head Brewer Keith Bennett and his yeastie boys.