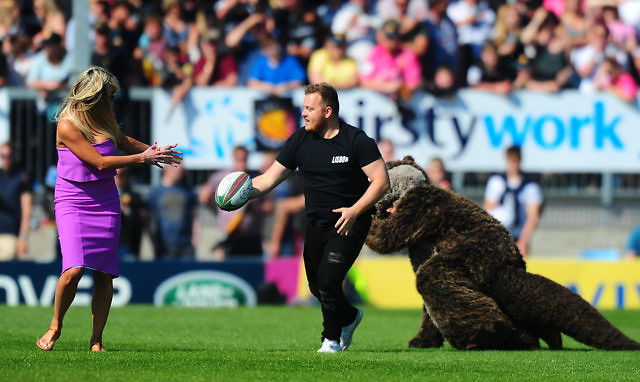 So the end of the season draws nigh and the final chapter is once again in the hands of our magnificent Chiefs. This weekend our boys trail-blazed their well-deserved path to Twickenham and Derek took his final stretch across the hallowed turf of Sandy Park.

As half time opened up and the drums silenced, so did the arms of the beer loving Otter, as he tried to coax the prettier of our two chasers into his lair. The ball seemed irrelevant for a moment as the other chaser (built more like a front row forward) tried to rip the ball from Derek as he danced his way down the touchline in front of his closest fans. Predictably, with his eyes on other matters, the hard yards he a had made were in vein as he was taken down with little remorse. For Derek though, there was an upside. Our very feminine contender took a breather and used him as a seat. Happy days – relax with an Otter.

London’s Calling again for Rob Baxter and his Exeter Chiefs side after they breezed their way into a third successive Aviva Premiership Final with victory over visiting Newcastle Falcons.

The defending champions dominated throughout at a sun-drenched Sandy Park to set-up a mouth-watering encounter against Saracens at HQ in a week’s time.

Three Joe Simmonds penalties allowed the Chiefs to build up a head of steam before Aussie scrum-half Nic White stole over under the posts just before the break to claim the first of three converted tries for the Devonians.