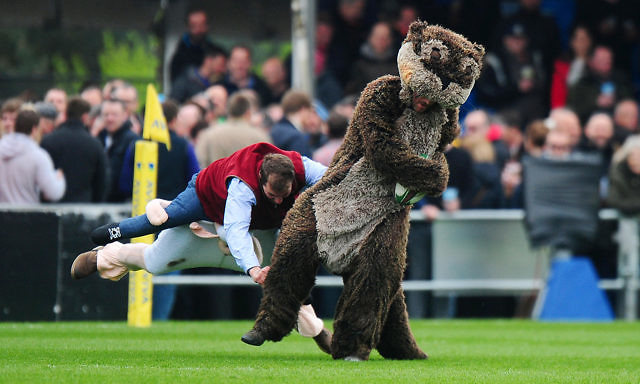 
Derek was definitely put through his paces in the warm up this weekend. Sale were working out how to avoid defeat, the Chiefs how to wrap their game in a table topping performance and Derek.… well, how to fend off an intrepid chaser disguised as a rather unconvincing sheep. Having blocked nearly 30 contestants during the Otter crash bag challenge – Derek was out of the blocks relatively quickly, brushed off the sheep, a traditional step, kick and chase. Trouble was he was blowing like a train (Happy Birthday Thomas) with little left in the tank. Larry the lamb raced to the centre spot to down the ball in the pint. Well done everyone – especially Derek who went off hunting ice.

As the final prep is made to Harry and Meghan’s big day on May 19, so the planning is already being put in place for Exeter’s showpiece occasion on the same day.

The Chiefs already knew they had home advantage for next month’s semi-final showdown at Sandy Park, but they helped rubber-stamp their authority in the Aviva Premiership by collecting a maximum haul against visiting Sale Sharks.

Tries from Nic White White, Lachie Turner, Jack Yeandle and Greg Holmes were the highlights of another decent display from Rob Baxter’s side, whose latest victory on home turf ensured they will finish top of the Premiership pile come the end of the regular season next weekend.