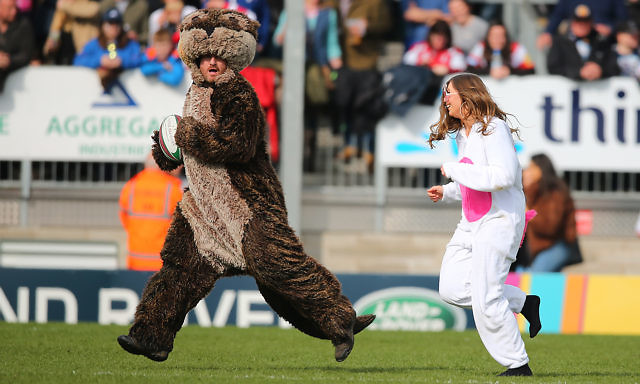 
So Lady Cunningham came to meet Derek the Otter dressed as a love-struck unicorn and failed to disappoint in all respects. After the usual showboating to his admirers, in the what was a very excited and noisey East stand, Derek seemed to lack his usual pace on the hallowed turf. Possibly too much first half excitement, maybe one too many beer for lunch or more likely, his challenger was just politely slow and respectful of our fury friend. Having said that, when Lady Cunningham dropped a gear and exerted some pace, she managed to get her horn on the wrong side which left her somewhat crumpled to say the least. Secretly I think she was saving her energy for post-match party in town – such an amateur!

Watching England head coach Eddie Jones was given plenty to ponder as he watched defending Aviva Premiership champions Exeter Chiefs seal their place in this season’s play-offs with an emphatic six-try victory over visiting Gloucester.

With a glut of Red Rose talent to peruse on the lush Sandy Park turf, Devon’s finest served up a sumptuous Sunday treat to maintain their position at the summit of the table.

First half tries from international duo Alec Hepburn and Sam Simmonds, plus another from Olly Woodburn, paved the foundations for the victory, which was sealed with a second half double from Jack Nowell and another from Gareth Steenson.