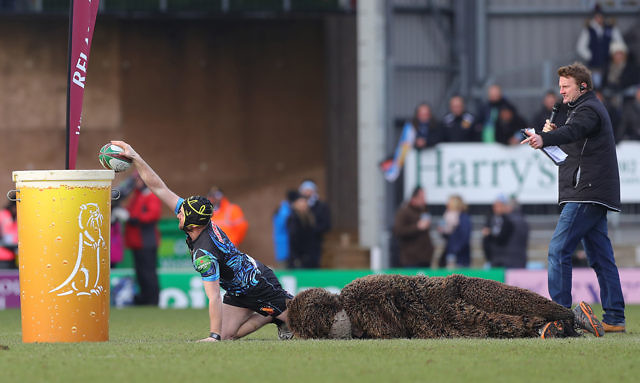 
In what turned out to be a pacey race to the pint, Derek had to dig deep to out run the Exeter kit clad chaser during the half time break – whilst the Chiefs caught their breath before finishing off the North Londoners. In fairness, Derek was nearly finished off after a fairly tough tackle and some ruthless jackeling. He finally lay stretched flat out in a last gasp attempt to prevent the ball being dunked in the pint …… another day, another tackle.

The effects of the ‘Beast from the East’ and ‘Storm Emma’ may have melted away as quickly as it came, but Exeter Chiefs showed they are more longer lasting in terms of their title defence as they extended their lead at the top of the Aviva Premiership.

Rob Baxter’s side are now seven points clear of Wasps at the summit after they saw off fellow play-off contenders Saracens 24-14 with a hard-fought display at Sandy Park.

Three first half penalties from fly-half Joe Simmonds, plus a try from full-back Phil Dollman, gave the hosts a slender 14-12 advantage at the break as the visitors countered with tries from Ben Earl and Schalk Brits, one of which was converted by Ben Spencer.