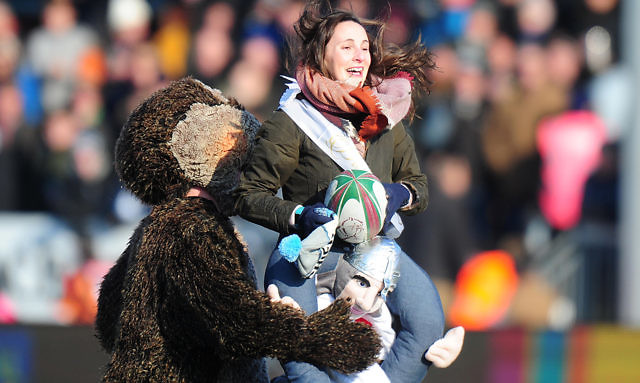 
A chilly afternoon where ‘tails’ of the unexpected made for some exciting rugby all round. Just when they thought it was all over, a Knight in silver armour carried a bride to be, who threw down her gauntlet to challenge Derek to a race across the Sandy Park turf at halftime. While the Chiefs regrouped, Derek flew past his groupies in the East Stand hotly pursued by the ever-smiling contestant. Amidst the usual posturing Derek seemed to run rings around our dashing Knight before becoming so giddy, that he totally lost his bearing and was nailed to the deck by the ever smiling, Exeter supporting hen and her barer. Girding her loins (and bobble hat) she pulled herself together, spurred on by a very vocal Sandy Park, she was carried home triumphantly, by the knight and dotted the ball in the pot to score a memorable try. Almost as memorable as the one we all later witnessed in the 81st minute.

It was like a Rocky movie, the two prized fighters battled it out until the death, after which the hero rose from the deck in the final round to claim a famous victory.

In this case, it was reigning Aviva Premiership champions Exeter Chiefs who hauled themselves off the deck to claim a first league win of 2018.

With time up on the clock, a converted Thomas Waldrom try floored visiting Northampton Saints, who came within a whisker of inflicting a fourth successive top-flight loss on Rob Baxter’s side.