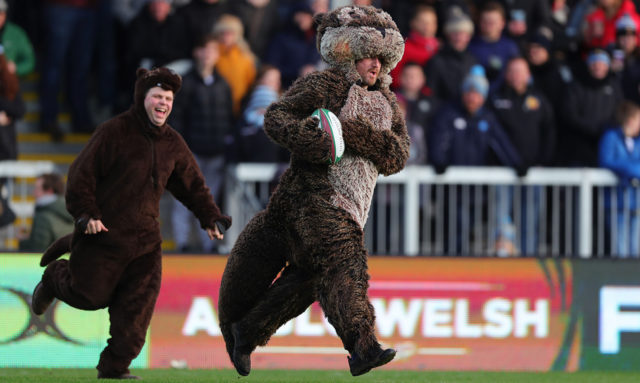 
Mink or minx….. that is the question, as Derek resumed his half time duties.

In a match where the result would determine another crack at Anglo Welsh silverware, Derek was keen to come out the blocks at pace, given the contestant this week was purported to be a Mink of some variety (debateable). After the traditional posturing to his East Stand fans, his infamous goose step came to the fore. Interesting to note that the mimicking mink’s step was hardly comparable despite his training sessions with the resting Will Chudley. Stealth over speed seemed to be catch of the day and after a couple of loose tackles the cunning mink popped the ball in the pint to score first at a packed Sandy Park.

A week ago it appeared Exeter’s Anglo-Welsh dream was hanging by a thread following their defeat at Worcester. Tonight, it’s alive and kicking as the Chiefs booked themselves a home semi-final against Newcastle Falcons with this seven-try victory over visiting Saracens.

Having surrendered top spot to Harlequins heading into the final round of pool games, the odds were seemingly staked against Devon’s finest with the Londoners needing to collect just a solitary point from their own trip to Northampton Saints on Friday night to ensure they would be the side to advance from Pool 2.

What transpired, however, was just the ticket for the Chiefs as not only did Northampton prosper 36-10 to seal their own semi-final spot – but, more importantly, they denied Harlequins any kind of reward and left them stranded on 15 points. That in turn meant Exeter would need to collect a maximum haul of their own to seal the all-important top spot.