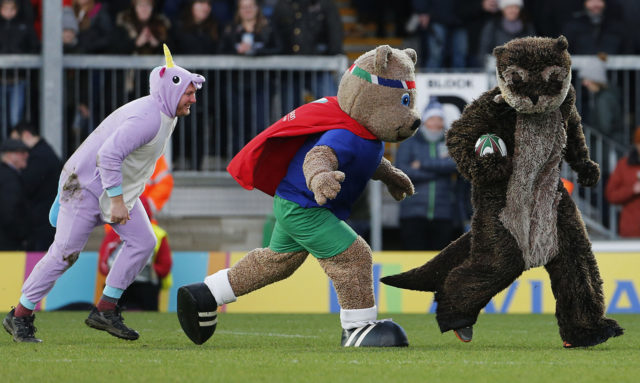 
Derek on form whilst the Tigers regrouped at Sandy Park.

Back on the scene after his alter ego took a hiding at the Leinster match back in December (re-watch that here) Derek, full of New Year’s promise, sided with his old friend Spooney who had been masterfully raising money for disadvantaged & disabled children in the UK. Not known for his electric pace, Spooney flanked Derek whilst trying to out run a well-built pink Unicorn. Much to our horror our charitable friend swapped sides and paired up with ‘Uni’ for a double tackle on Derek. A pitiful effort really as it only fired up Derek’s resolve to score. However this was not to be as Derek lost the ball in the tackle and was turned over by Uni who passed out wide to Spooney who then ran in triumphantly. At the last minute, selfless as ever, our charitable friend floated the ball back to the Unicorn to dot down in the pint on the halfway line. He was then ceremoniously dumped in what must be seen as a very late in the year tackle!

If you’re an Exeter Chiefs fan you probably don’t want 2017 to end, such has been the joy the past 12 months has brought.

That said, Rob Baxter’s side will head into the New Year not only as reigning Aviva Premiership champions, but top of the current pile, some ten points clear of next-best Saracens.

Tasked with finishing the year on a high, the Chiefs duly rose to the occasion, scoring four second half tries to ensure not only maximum reward but condemn visiting Leicester Tigers to a sixth straight defeat.