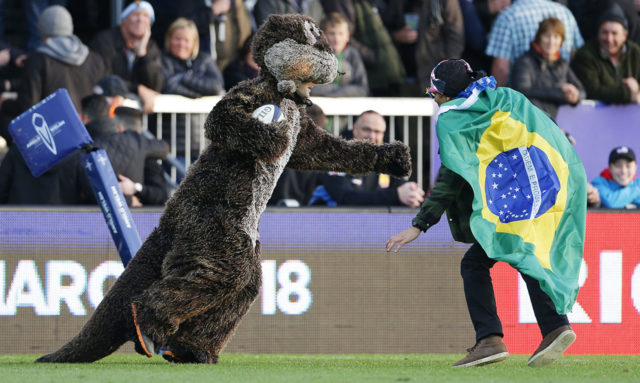 Here’s Derek’s view of how last Saturday’s match went down…..

A couple of weeks rest whilst Heine Ken the rodent covered Sandy Park half time duties in the Champions Cup (see video). This downtime clearly paid dividends as Derek came out of the blocks at pace, pursued by what looked to be a confused Brazilian national sporting some GB head gear and a garland of white flowers……..quem? Our contestant’s footwork was not quite that of Neymar but he did eventually mange to bring Derek down by the tail. Beyond this a marginally X-rated manoeuvre took place before our contestant slammed the ball in the Otter pint and then was dutifully dumped by a rather disgruntled Derek.

Firework Night may be 24 hours away, but Exeter Chiefs put in a sparkling display to kick-off their Anglo-Welsh Cup campaign with a bang.

Ricky Pellow’s side were all fired up on their way to a seven-try success against visiting Northampton Saints in this Round One opener at Sandy Park.

Summer signings Toby Salmon (2), James Freeman and Tom O’Flaherty were all on the mark for Devon’s finest, as were James Short, Alec Hepburn and Elvis Taione.