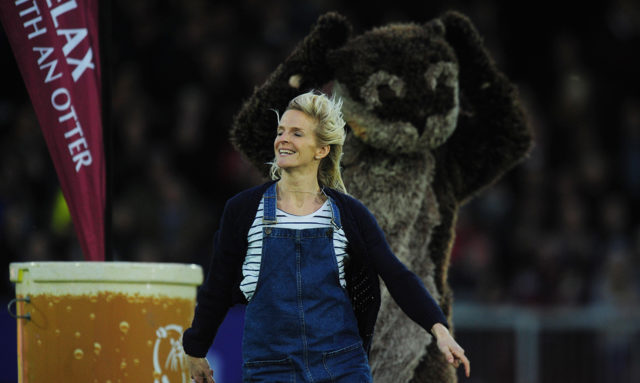 Here’s Derek’s view of how Sunday’s match went down…..

Back in the throes of the Premiership, Derek was eager to up his game in front of a full house at Sandy Park. With marginal weather conditions all was set for a good chase but a question hung over the potential experience and grit of the chaser. Our sources believe her to be Hannah from Newquay (to be confirmed) and our health and safety briefing suggested a rather gentile trip around the park might be order of the day. That was not what Hannah had in mind. Derek took off with a gentle and respectful spring in his stride heading for the East stand to whip up a little support for the chaser. Nothing short of jet propulsion would have increased the pace of our Cornish guest who nailed Derek at a speed that any Exeter back would have been proud of. Who is this girl? Sandy Park went wild – back on her feet, tearing to the centre of the pitch, she dispatched the ball into the Otter pint pot. Her hands raised high to the skies in a jubilant salute. My word, that took the wind out of Derek’s sails and has raised the bar once again.

Far from their best showing of the season, Rob Baxter’s side did more than enough to collect all five points and send the Londoners back to the capital with scant reward for their workmanlike efforts in the Westcountry.

Wingers Lachie Turner and Olly Woodburn collected a try apiece for the Devonians, while lock Jonny Hill ensured the bonus point by dotting down twice in the second period as the Chiefs collected their sixth success of the current campaign.